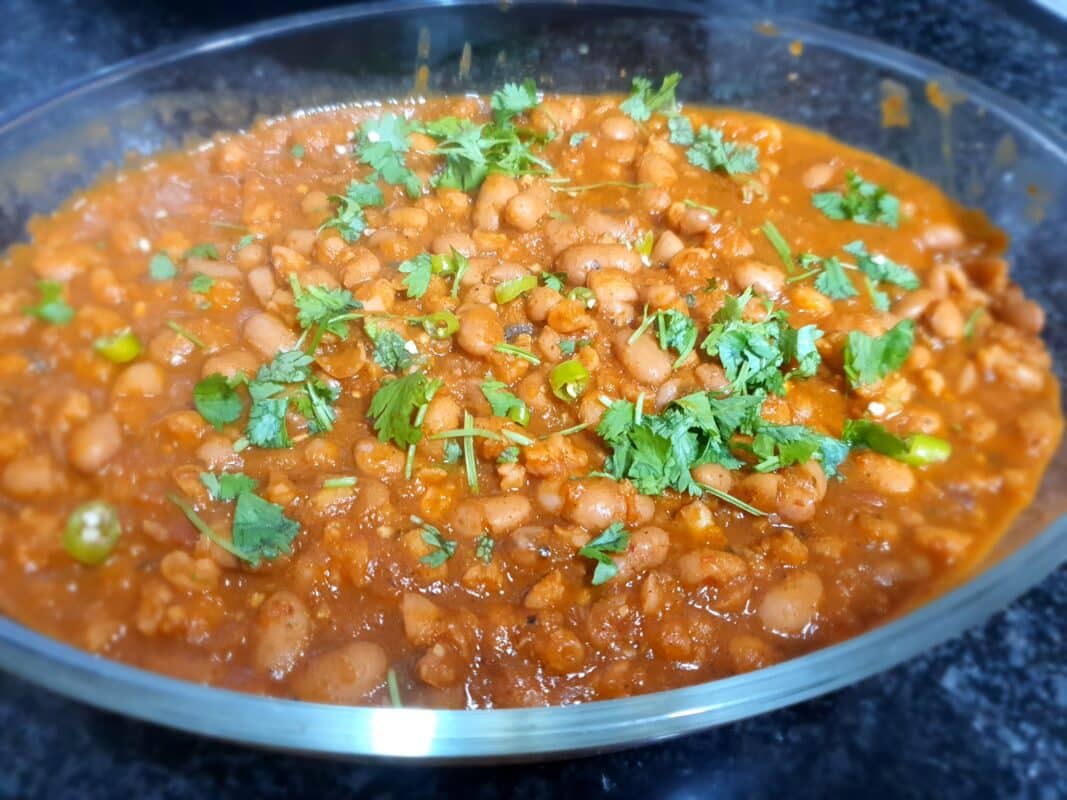 To say that today was a rush, is an understatement.

My plan was to make Naan Bread to accompany it. What could be more delicious than some fresh Garlic Naan Bread with some Hot & Spicy Durban Curry?

This morning started off very busy at work. I hardly got time to put the samp and beans in to soak, but I remembered to do it at about 11:30

I rinsed the raw samp and beans five or six times and then set them aside in separate bowls of water for a couple of hours. My plan was to start cooking at about 3pm. Although they ideally should soak overnight.

I am not sure if there are other reasons, but I was told that when you soak the beans, they release a certain sugar into the water. This sugar is what brings on the famous flatulence after eating beans, so I had a good giggle to myself when I rinsed the beans after soaking, and poured the liquid farts down the drain.

Anyway, onto something a bit more appetizing.

I put the samp and beans onto a slow boil. They had been boiling for about 30 minutes when my phone rang. It was my wonderful wife. She finished a meeting early and could shoot me through to Cape Town to collect my car, which has been in the panelbeaters.

Ok, lets go. I turned the stove off and left the samp & beans to soak in the hot water.

Three and a half crikey hours later, we got home. Cape Town traffic is no fun, I am so glad we live in the countryside.

Now I am already rushed and I still have to cook a separate meal for the kids. The older one has never liked any sort of bean, and the baby girl is just that. I decide to make a pasta for them, to complicate things even more, the little girl does not like mushrooms so I have to do two versions of the creamy bacon pasta. (There is something that I wanted to try with the mushrooms, so just making one version was out of the question.)

Anyway, I turn to my trust food processor and into it I bomb a large onion, 2 green chillies, 3 dry red chillies, some curry leaves, some dhania and fresh ginger. I had no fresh garlic, so I just added some of that horrible store bought chopped stuff into the pot to sizzle with the ghee, rather than stink out my food processor.

10 seconds later, ready for action. I can not tell you more sincerely, this is now my go-to method.

Just look at this. Bursting with flavour.

In go my onions etc into the pot, which is already sizzling with some ghee and garlic.

I let this cook down until the pot starts to go dry and then I add a few splashes of hot kettle water, give it a good mix and then, whilst occasionally stirring, let it cook down and soften.

When the water has cooked off, I then added 2 heaped tablespoons of Durban Curry Lovers, all-in-one Masala. Gave it a good mix and, again whilst stirring occasionally, let the spices temper in with the mixture.

As above, when the pot starts to go dry, add some hot kettle water. You will not believe the difference it makes to your masala. Mix it all up and let it cook down until the water evaporates.

I use this method to temper my spices, as I have drastically cut down on the amount of oil that I use.

It works, do not let anybody tell you any different.

Now that my masala was nicely tempered and the foundation of my gravy was ready, it was time to add the tomatoes. I just used three salad tomatoes, as they were ripe and I did not want them to go to waste.

Jam tomatoes are best, but let’s not waste food. It is a blessing.

Well, the tomatoes did not feel like they were being blessed, when I blitzed them in the food processor.

Again, a job that would have taken me 5 minutes to grate the tomatoes, took me 10 seconds.

In went the tomato. All hail to the food processor, my new best friend.

Mix, mix, mix and let cook down until you can see the oil separate from the gravy.

Now it is time to add the samp & beans, in they go with the water that they were cooked in.

I turned the flame down to low and let it all simmer for 30-45 minutes, while I turned my attention to the kids pasta. The WW (wonderful wife), is on a juice diet, so I cunningly chose to make the kids something with bacon in it.

Between dishing for the kids, I made a small plate of sambals to serve with the curry.

Oh ja, I was supposed to serve it with Naan Bread, but I did not have any yeast so I made some rice.

There was a beautiful sky outside our kitchen window, so in a soppy serenade to the beauty of Gods creation, I attempt to recreate it in my rice. It kinda worked and I was kinda chuffed, but not as chuffed as I would have been with some freshly made Naan …. maybe tomorrow.

Anyway, after all that. I got to dish.

Although the photo does not do it justice, this was one of the most enjoyable meals that I have had for a very longtime.

I will sure be making it again, but will definitely put more samp in as it was the star of the show.

For a straight Sugar Bean Curry Recipe, try this one.

If you would like to try our Durban Curry Lovers, All-in-One Masala, you can purchase from our online store www.currylovers.co.za

We deliver nationwide and internationally. If your country is not on the list, then pls contact me and I will arrange the delivery.

Oh, this is how the pasta came out. 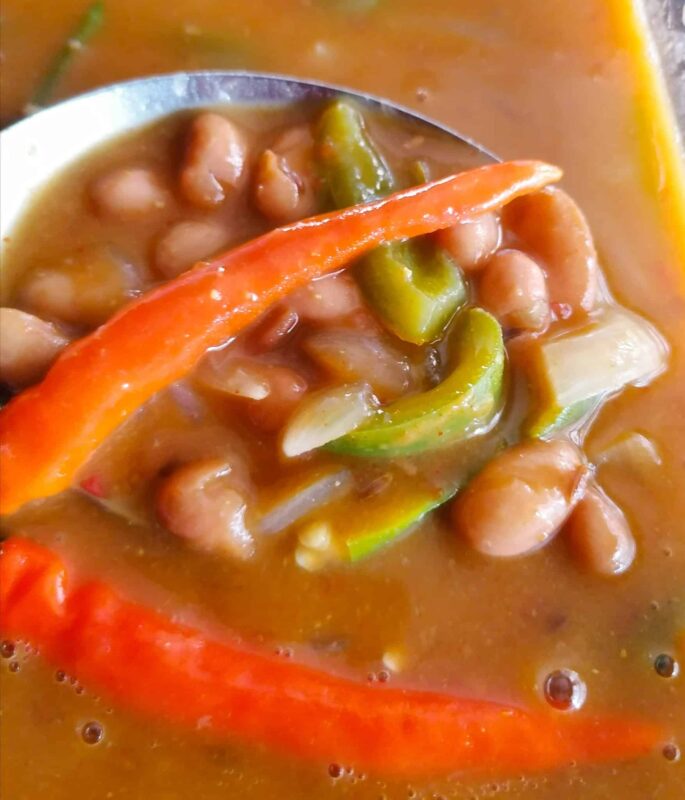 Thanks to Rajashree B for sharing her recipe.

If you would like to try our Durban Curry Lovers, All-in-One Masala, you can purchase from our online store www.currylovers.co.za
We deliver nationwide and internationally. If your country is not on the list, then pls contact me and I will arrange the delivery. 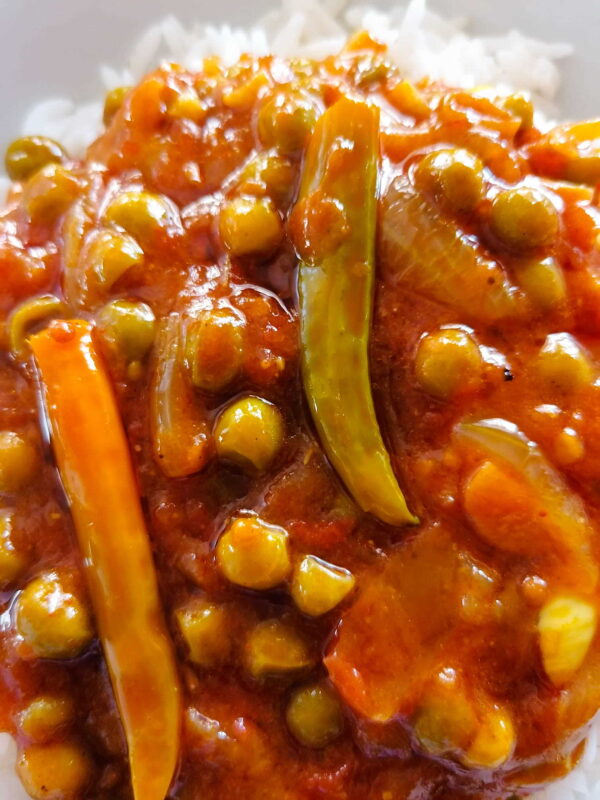 Thanks to Rajashree for sharing her recipe for her delicious, Hot Pea Chutney.

Delicious and something to remember for #meatfreemonday 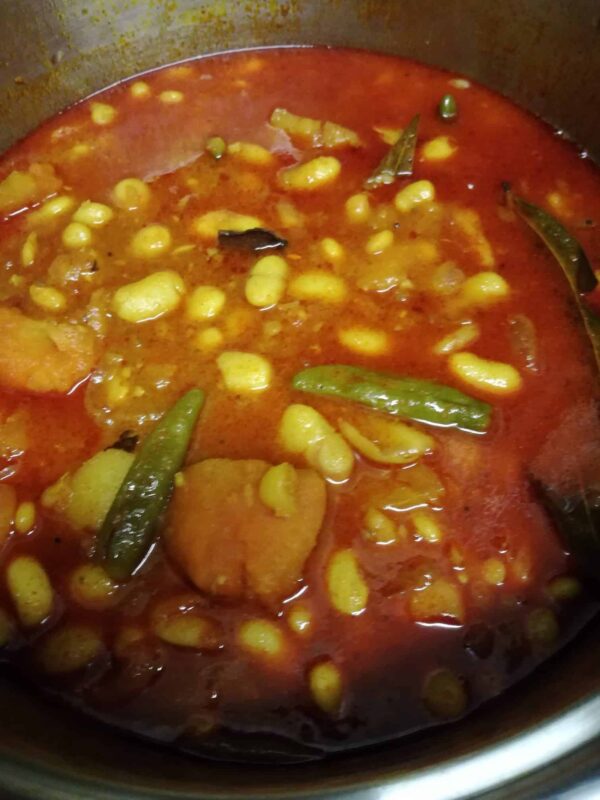 Broad beans have a long tradition of cultivation in Old World agriculture, being among the most ancient plants in cultivation and also among the easiest to grow. Along with lentils, peas, and chickpeas, they are believed to have become part of the eastern Mediterranean diet around 6000 BC or earlier.  (wiki)

Durban Curry Lovers Member, Kubeshniee G, shares her recipe to this absolutely delicious broad bean curry – and it sure was a hit amongst the members.

For more recipes by Kubeshniee G

You are invited to join our Facebook group, “We are Durban Curry Lovers“, where a group of wonderful people share their tips, tricks & family secrets on our quests in becoming a Master Curry Chefs. 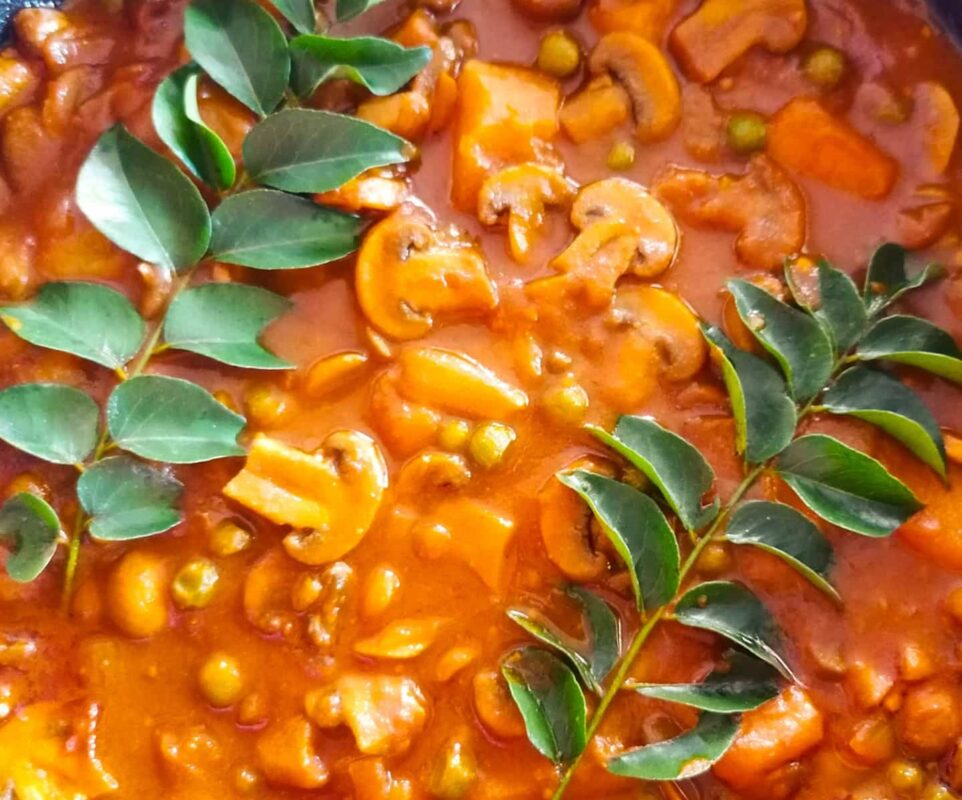 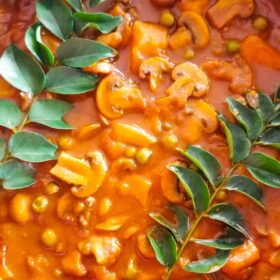 This beautiful meat-free dish was shared by Rajashree B

Such a great idea. Thanks for sharing. 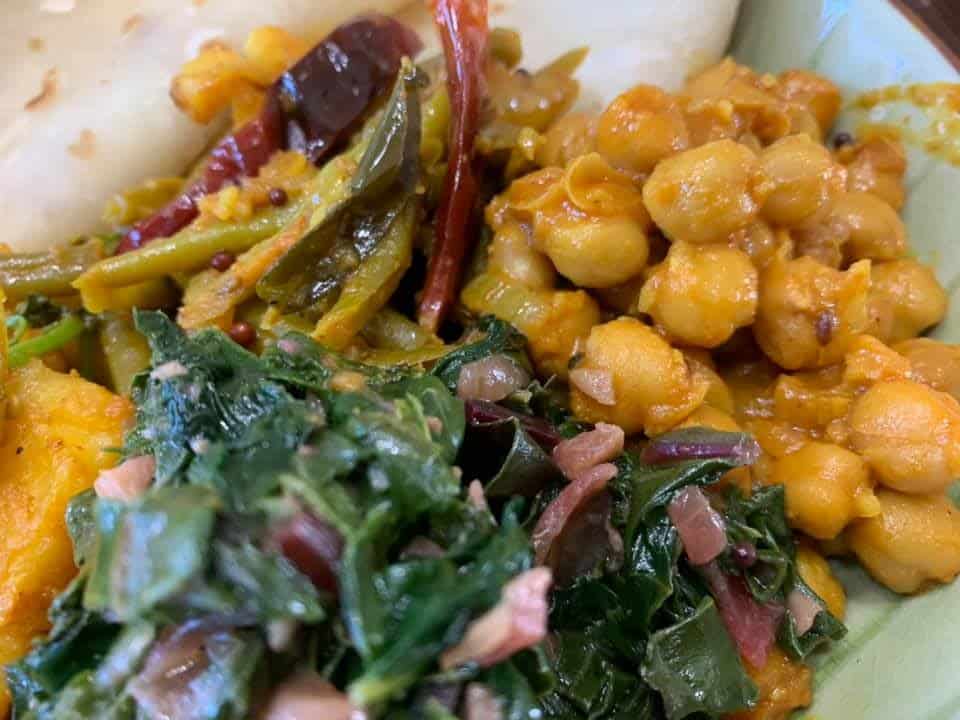 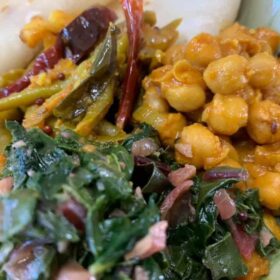 Thanks to Scott T for sharing this fantastic Durban Beet Leaf recipe.

Follow this step-by-step recipe to cook this all vegetarian curry dish at home. 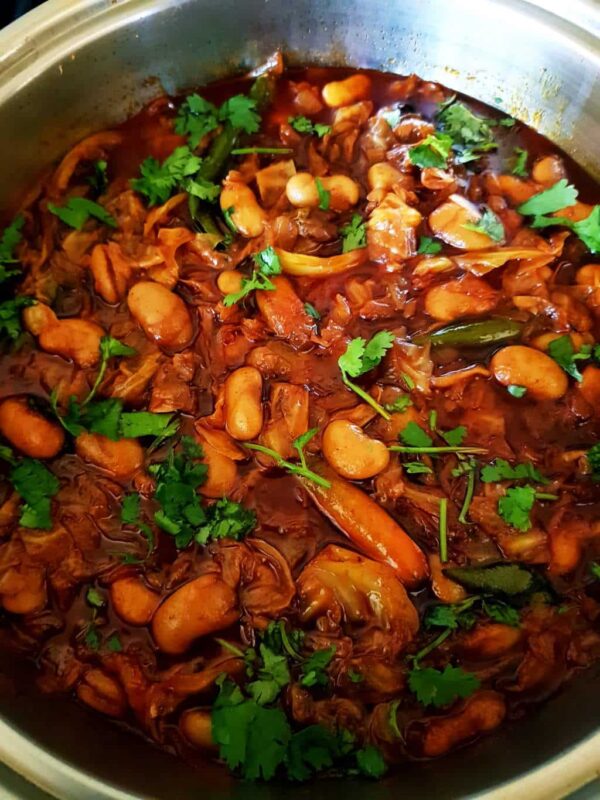 Thank you for sharing the recipe to this delicious dish. 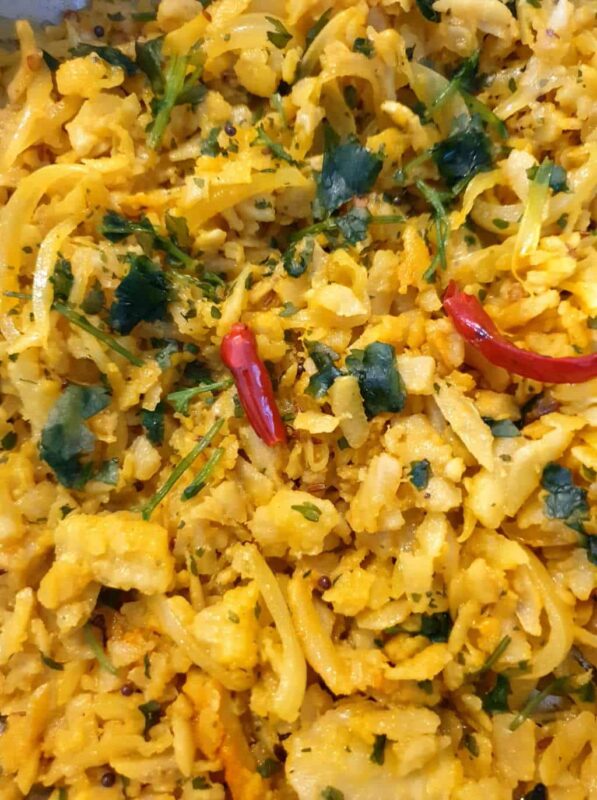 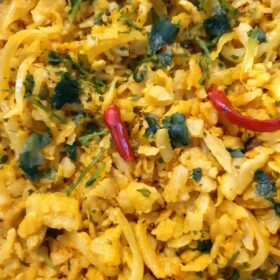 If you are looking for a simple & delicious recipe for Meat-Free Monday, look no further than another iconic Durban Curry dish, the Green Banana Curry.

Follow this simple step-by-step recipe to cook this amazing dish at home.

Hint: Rub a bit of oil onto your hands before handing the banana’s. This will prevent the sap from getting stuck on your hands and making your hands sticky. Us South African’s sure love to braai & us Durbanite’s sure love our curry – why not combine the two.

Here is the recipe for the sugar beans. It is not complicated at all, due to the all-in-one Masala.
Everybody has their own recipe for beans, but this is how I cooked this specific dish.

The steak … well that is a different story, as we all have our preferences. This one was just done for 3 mins on each side on the gas grill.

(For some awesome braai recipes, join Stand By Fire Time on Facebook)

Join our Group, We are Durban Curry Lovers where a wonderful group of people, share tips, tricks and their love of all things curry.

Masala Chips, what more to say than Mmmmmmm.

Cook this absolute favourite at home by following this simple step-by-step recipe.

My lovely wife and I knocked this 4 bean curry together in 15 mins, whilst we were busy cooking Sunday lunch. It was supposed to be an accompaniment, but we ended up eating it with fresh bread and butter, as a starter whilst we were cooking. This is what life is about.

METHOD
1. Gently heat your oil & add your mustard seeds, garam masala & fenugreek powder. (make sure not to burn)
2. Add your onion, stir & then your garlic & ginger paste & saute until soft.
3. Add your Masala/Curry Powder and saute until fragrant (make sure not to burn)
4. Add your Tomato or Grated Fresh Tomatoes or even a mix of both and saute until the tomatoes have melted and you have a rich gravy. (add water as required, if the gravy starts to stick or is too dry)
5. Add Curry Leaves & Salt
6. Add your can of Beans, gently mix, reduce heat and simmer for 5 mins
7. Garnish with dhania leaves (corriander)
8. Ready to serve. 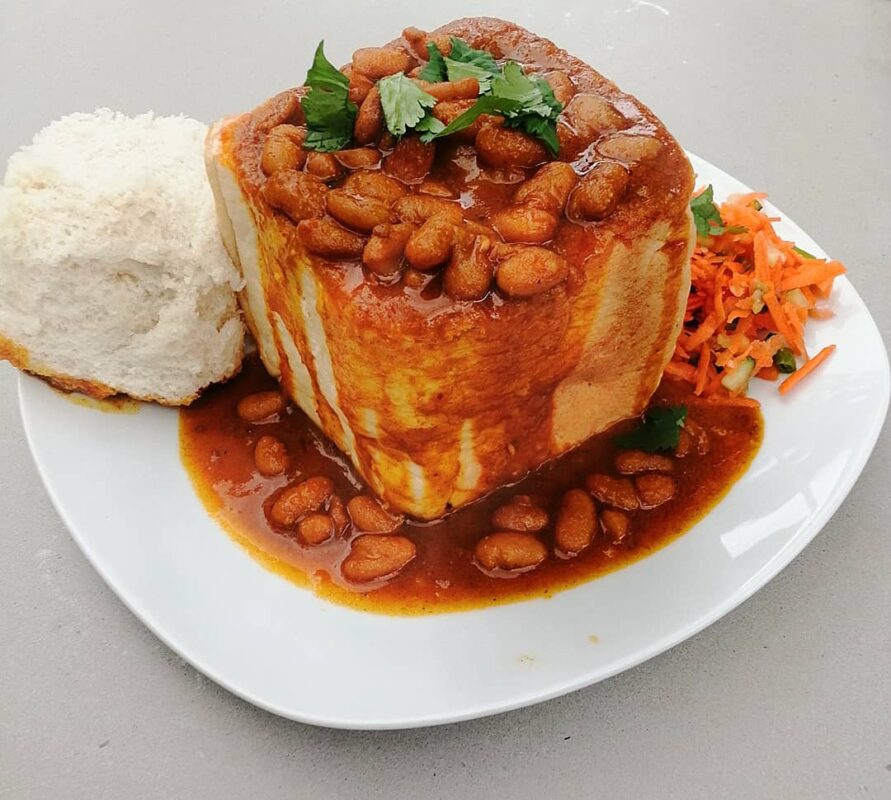 In the late 80’s, early 90’s, some of my very best days (or should I say, early mornings), were spent with my friends eating R2 Bean Bunnys at a takeaway called Willowtree on Durban’s beachfront after a night out on the town.

“Going for a beans”, was as much fun as the night out itself and I could tell you many stories about those nights.

For this recipe, I pre-boil 250g (half a pack) of washed Red Speckled Beans, commonly referred to as Sugar Beans.

Normally, one would soak the beans overnight, drain, rinse again and simmer in fresh water for between 1-2 hours until soft. Remove the beans from the water, but RETAIN the water as you will need it later.

I treated myself to an electric pressure cooker, called the Midea InstaChef . I rinse the beans, put into the wonderful little device and in 10 minutes the beans are absolutely perfect and ready to put into the curry base.

HINT: A Bean and Chicken Curry is absolutely fabulous, simply follow our Chicken Curry Recipe and add the beans when you add your potatoes. 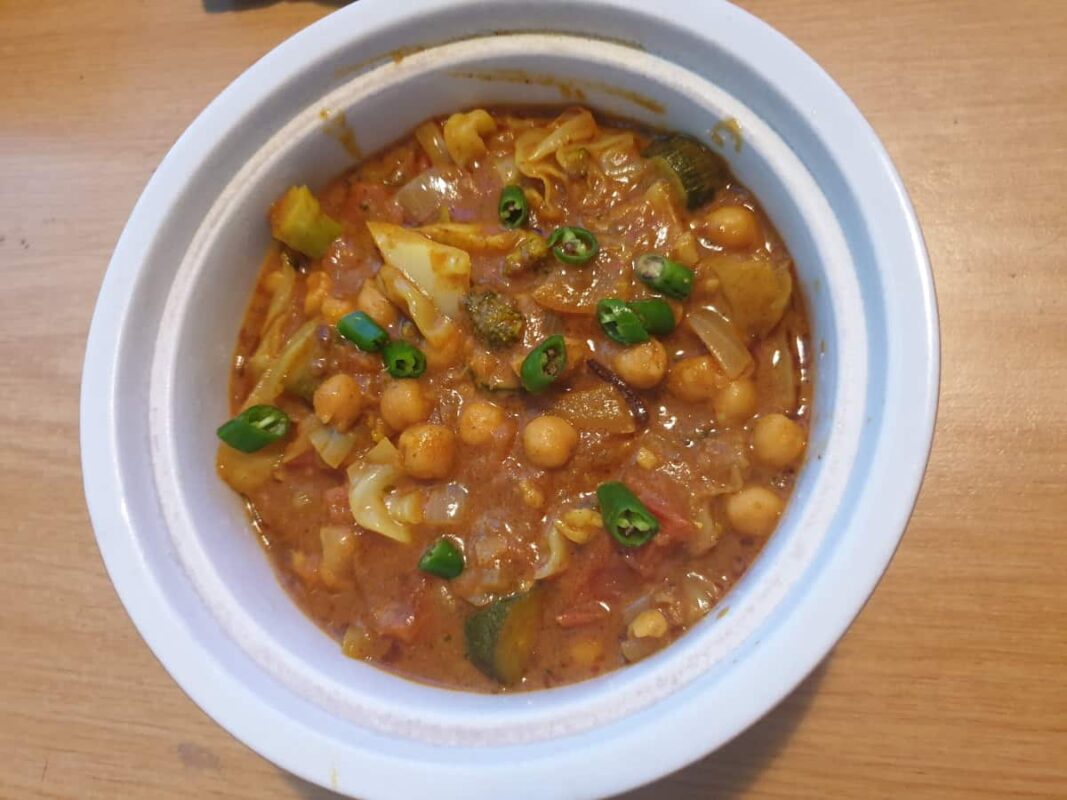 Greetings Curry Lover – As you can see, we are short on veg curry recipes. It would be easy to copy some from the web, but that would go against the spirit of our blog.

If you have a great veg curry recipe, please may you share it via email to [email protected] or via the form below.

You will receive full credit. Thank you very much. 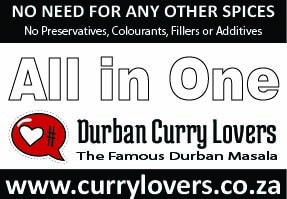